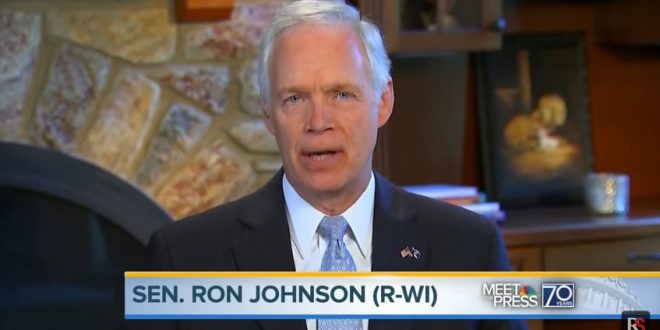 Sen. Ron Johnson (R-Wis.) on Thursday acknowledged that “it’s a real possibility” that a reference to a “secret society” in a text message exchange between two FBI officials was made in jest. The Wisconsin Republican told CNN and ABC News that it was possible that there is no “secret society” amid an uproar from GOP officials about the possible “deep state” cabal.

Johnson stoked speculation on Tuesday, when he claimed in an interview on Fox News that he had been in contact with a whistleblower with knowledge of “off-site” meetings between FBI and Justice Department officials. He acknowledged on Wednesday, however, that he did not know what had been said in the alleged meetings.

The words “secret society” have been in dozens of far-right headlines and trended in the Pizzagate-O-Sphere for days.

Ron Johnson, who raised alarms this week about the FBI agents’ “secret society” text, just told me: “It’s a real possibility” the text was written in jest.

“It’s really clear to me that the decision was made in May 2016, two months before the press conference.” #SecretSocieties #ReleaseTheMemosNow

It's a stand alone message from Lisa Page:
"Are you even going to give out your calendars? Seems kind of depressing. Maybe it should just be the first meeting of the secret society" https://t.co/qxlXSgYAme

Source who revealed existence of FBI secret society one month before it was in the news says it includes federal judges, former Attorney Generals and one sitting Attorney General of a large U.S. state.

Says they are panicked after Strzok was exposed.https://t.co/iNFlJAaG9D

Did someone say secret society? pic.twitter.com/bHGCfJcyLB

Previous GOP US Senate Candidate: Women Should Stay Home And Make Dinner, Not Be “Career-Obsessed Banshees”
Next REPORT: Romney To Unveil Senate Bid Next Week