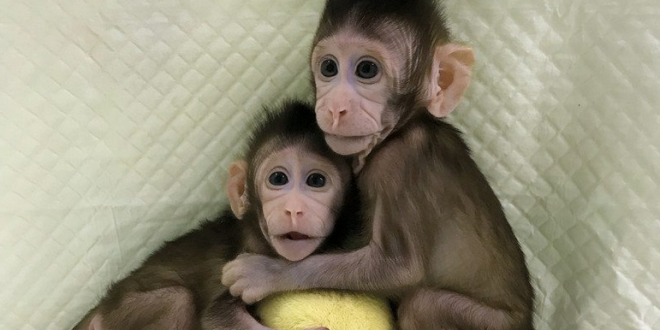 For the first time, researchers have used the cloning method that produced Dolly the sheep to create two healthy monkeys, bringing science an important step closer to being able to do the same with humans.

Since Dolly’s birth in 1996, scientists have cloned nearly two dozen kinds of mammals, including dogs, cats, pigs, cows and polo ponies, and have also created human embryos with this method. But until now, they have been unable to make babies this way in primates, the category that includes monkeys, apes and people.

“The barrier of cloning primate species is now overcome,” declared Muming Poo of the Chinese Academy of Sciences in Shanghai. He and colleagues announced their success with macaques in a paper released Wednesday by the journal Cell. The female baby monkeys, about 7 and 8 weeks old, are named Zhong Zhong and Hua Hua.

The female long-tailed macaques represent a technical milestone. It should make it possible to create customisable and genetically uniform populations of monkeys, which could speed up treatments for diseases such as Parkinson’s, Alzheimer’s and cancer. But the breakthrough will inevitably raise fears that human cloning is closer than ever.

The monkeys hold such huge potential because they all inherit exactly the same genetic material, says the Chinese team that cloned them. This would enable scientists to tweak genes the monkeys have that are linked to human disease, and then monitor how this alters the animals’ biology, comparing it against animals that are genetically identical except for the alterations.

In 2000, researchers cloned monkeys for the first time, but did so by splitting an embryo after it had been fertilised, essentially just producing a genetically identical twin. This method can only be used to create a maximum of four identical animals. Now, Qiang Sun at the Chinese Academy of Sciences Institute of Neuroscience in Shanghai and his colleagues have tweaked the technique used to produce Dolly to create a theoretically limitless number of clones.