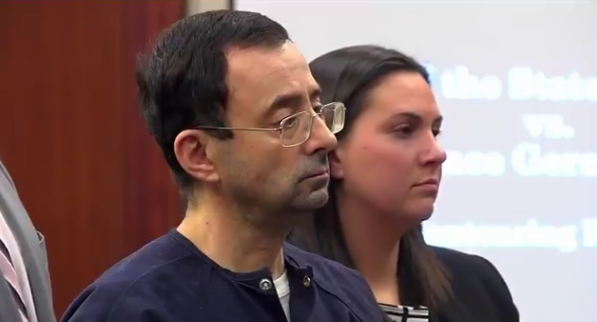 Up To 175 Year Sentence For Pedophile Sports Doctor

The former sports doctor who admitted molesting some of the nation’s top gymnasts for years was sentenced Wednesday to 40 to 175 years in prison as the judge declared: “I just signed your death warrant.”

“It is my honor and privilege to sentence you. You do not deserve to walk outside a prison ever again. You have done nothing to control those urges and anywhere you walk, destruction will occur to those most vulnerable.”

The sentence capped a remarkable seven-day hearing in which scores of Larry Nassar’s victims were able to confront him face to face in a Michigan courtroom.

“It takes some kind of sick perversion to not only assault a child but to do so with her parent in the room,” prosecutor Angela Povilaitis said. “To do so while a lineup of eager young gymnasts waited.”

This is the moment Judge Aqualina read from Nassar’s non-apologetic letter, dropped it, glared at him and asked if he wanted to withdraw his plea. pic.twitter.com/eoeTQssgMU

“I just signed your death warrant.”: Judge to Nassar after sentencing him to 40-175 years in prison pic.twitter.com/Y7rzCzb5Oz