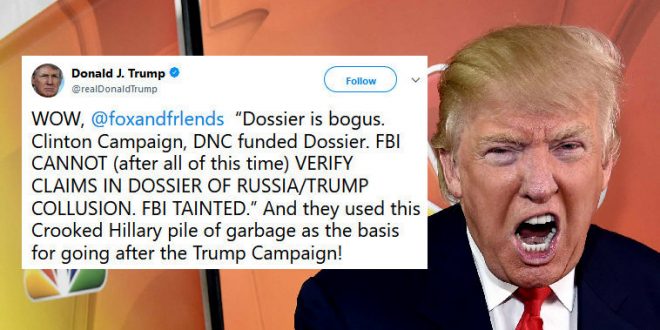 Hair Furor began his day at Mar-A-Lago by watching Fox & Friends and screaming along with them that the Russia dossier is “bogus.” Multiple media figures responded with tweets pointing out that much of the dossier has already proven to be factual:

For the first time, US investigators say they have corroborated some of the communications detailed in a 35-page dossier compiled by a former British intelligence agent, multiple current and former US law enforcement and intelligence officials tell CNN. As CNN first reported, then-President-elect Donald Trump and President Barack Obama were briefed on the existence of the dossier prior to Trump’s inauguration.

WOW, @foxandfrlends “Dossier is bogus. Clinton Campaign, DNC funded Dossier. FBI CANNOT (after all of this time) VERIFY CLAIMS IN DOSSIER OF RUSSIA/TRUMP COLLUSION. FBI TAINTED.” And they used this Crooked Hillary pile of garbage as the basis for going after the Trump Campaign!

How can you say a Dossier is bogus when much of the information in it has been corroborated? You of all people should know that it is pretty darned close to the truth!

In fact, US investigators have corroborated parts of the dossier as we reported last February: https://t.co/d8PmtBXLZX https://t.co/gAIIkwZReK

Trump continues his attack on the FBI. FYI—Officials have already said that parts of the dossier have been corroborated. It’s not “bogus” https://t.co/UGjq49kOJO https://t.co/9B16Mx0pkr