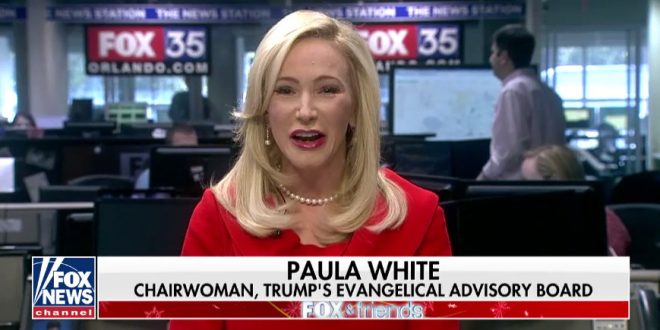 “Isn’t it nice to be able to say Merry Christmas, and to put Jesus Christ back on the White House lawn?” White, the chair of Trump’s evangelical advisory board, declared.

It’s not clear where Paula White is getting her specific information from, however. The Obama administration never removed Jesus Christ from the White House, and declared “Merry Christmas” every year.

.@Paula_White: “Trump just hasn’t put Christ back in Christmas, but he’s also put prayer back into the White House, he’s put justice… and religious freedom back into our courts.” pic.twitter.com/o4ifiM8nUd

Longtime televangelist and senior Pastor of New Destiny Christian Center in Apopka, Florida, Paula White offered her followers an Easter Sunday deliverance from a spiritual death sentence for a $1,144 “resurrection seed” she says was set by God.

Preaching the story of Lazarus who Jesus resurrected from the dead in John 11:38-44, White promised believers in a video appeal that if they would sow the seed and have faith, she believed deliverance would come.