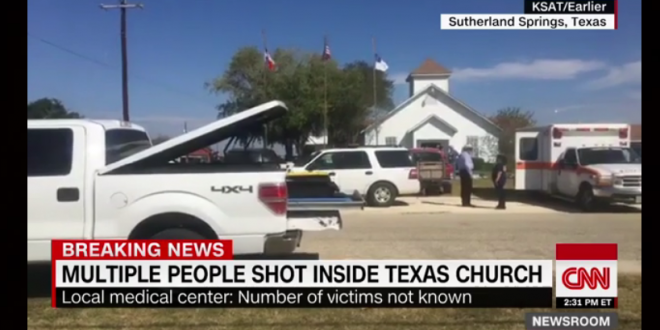 Multiple people have been killed and many more injured in a shooting Sunday at a church in Sutherland Springs, Texas, authorities said. The shooter was killed after a brief chase north into neighboring Guadalupe County, according Guadalupe County Sheriff’s Office spokesman Robert Murphy.

It is unclear if the shooter was killed by police or took his own life, Murphy said. The FBI is responding to the scene of the shooting, according to Michelle Lee, spokeswoman for the FBI’s San Antonio field office.

Local police also have responded to the scene, which occurred at the First Baptist Church, a witness told CNN. The witness, a cashier at a gas station across the street from the church, said she heard about 20 shots being fired in quick succession while a church service was underway around 11:30 a.m. local time.

A law enforcement source told CNN that a man walked into the church and began shooting about 11:30 a.m. local time. Agents from the San Antonio field office of the Bureau of Alcohol, Tobacco, Firearms and Explosives are en route to the scene, the source said.

May God be w/ the people of Sutherland Springs, Texas. The FBI & law enforcement are on the scene. I am monitoring the situation from Japan.

Karen & I send prayers to victims & their families in TX.We grieve w/ you & stand w/ resolve against evil. Thank you to the first responders

Reports out of Texas are devastating. The people of Sutherland Springs need our prayers right now.

Two of the four deadliest shootings in U.S. history have occurred in the last 35 days https://t.co/KsxEB2REA3

Time for this one again https://t.co/HTfpgO3Gmf

Why such different responses to two incidents of terrorism in America?