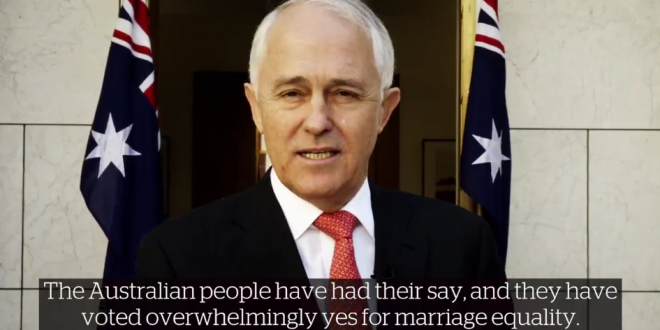 Moments after the survey result was announced, Australian Prime Minister Malcolm Turnbull appeared before national cameras and vowed his intention to get a same-sex marriage bill through Parliament by Christmas. Watch below.

Earlier today, Turnbull denounced right wing plans to laden the bill with “religious liberty” amendments which would legalize anti-LGBT discrimination by wedding-related businesses. According to Turnbull, such amendments are “non-starters.”

The people of Australia have spoken and I intend to make their wish the law of the land by Christmas. This is an overwhelming call for marriage equality. pic.twitter.com/PWZbH5H71r