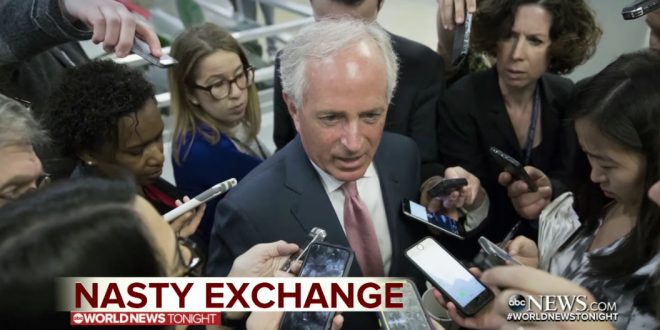 GOP Sen. Bob Corker: Trump Is A Liar Whose Reckless Threats Could Set Us “On The Path To World War III”

Talk about zero fucks left to give.

Senator Bob Corker, the Republican chairman of the Senate Foreign Relations Committee, charged in an interview on Sunday that President Trump was treating his office like “a reality show,” with reckless threats toward other countries that could set the nation “on the path to World War III.”

In an extraordinary rebuke of a president of his own party, Mr. Corker said he was alarmed about a president who acts “like he’s doing ‘The Apprentice’ or something.” “He concerns me,” Mr. Corker added. “He would have to concern anyone who cares about our nation.”

Mr. Corker’s comments capped a remarkable day of sulfurous insults between the president and the Tennessee senator — a powerful, if lame-duck, lawmaker, whose support will be critical to the president on tax reform and the fate of the Iran nuclear deal.

As for the tweets that set off the feud on Sunday morning, Mr. Corker expressed a measure of powerlessness. “I don’t know why the president tweets out things that are not true,” he said. “You know he does it, everyone knows he does it, but he does.”