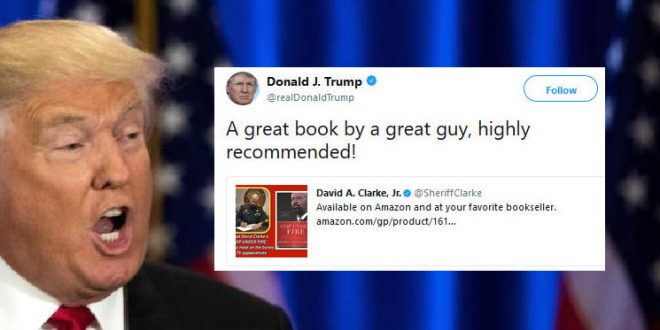 President Donald Trump on Twitter plugged a book by controversial Sheriff David Clarke in Milwaukee, Wisconsin, calling it “a great book by a great guy.” The president’s promotion of Clarke’s book comes a little more than a day after he pardoned Sheriff Joe Arpaio in Arizona, who had been convicted of contempt for violating a federal court order to stop detaining people solely based on their immigration status.

Like Arpaio, Clarke is a polarizing figure. The Milwaukee County sheriff is an outspoken Trump supporter and conservative firebrand known for his cowboy hat. He has called himself “one of those bare-knuckles fighters” and has been critical of what he has called the “hateful ideology” of the Black Lives Matters movement.

Clarke’s jail has come under scrutiny, with four people having died while in custody there in 2016. One of them died from dehydration after having gone with out water for seven days. An inquest jury earlier this year recommended charges in that death against seven staff at the jail, not Clarke. The District Attorney is continuing to weigh that recommendation, according to the Milwaukee Journal-Sentinel.

Clarke, as you surely know, has publicly threatened to murder his critics. A great book by a great guy, highly recommended! https://t.co/3jbDDN8YmJ

This is the guy who said of African Americans “they’re uneducated, they’re lazy and they’re morally bankrupt”

Clarke also claimed that BLM would one day join forces with ISIS. Why is Trump promoting this guy? (Nevermind, I think we all know)

It’s strange that you are promoting a book by the man who rejected your offer to head up Homeland Security. Does he have dirt on you?