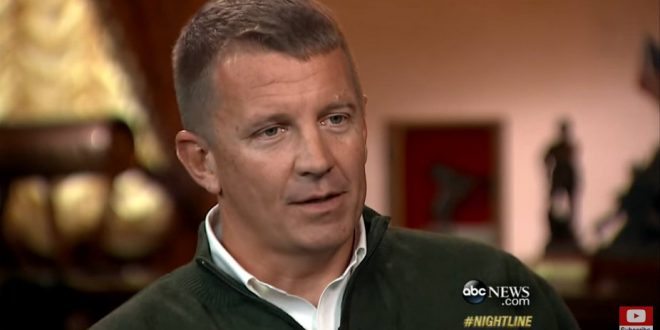 Erik Prince is a former Navy SEAL who founded the “security contractor” Blackwater in 1997 and acted as its CEO until 2009. Blackwater was heavily involved in the Iraq War, and in September 2007, Blackwater employees shot and killed 17 Iraqis in Baghdad’s Nisour Square in what numerous witnesses—including some Blackwater whistleblowers—described as the grotesque, unprovoked massacre of unarmed civilians.

A decade later, three Blackwater guards have been convicted of felonies in U.S. court for their involvement in what prosecutors called the Nisour Square “atrocity,” while another is awaiting retrial for murder. Erik Prince, meanwhile, is hanging around the Trump administration—and, as of Wednesday, writing a mind-boggling op-ed in the New York Times that argues that the United States should replicate its Iraq strategy by handing Afghanistan over to “security contractors.”

Prince has already fired back at his critics:

After the harsh media criticism the New York Times took for publishing an op-ed by Erik Prince, the Blackwater founder told Mediaite his “dense” critics should “actually read and comprehend the op ed.” In reference to his price reduction claim, Prince added, “if reporters are too dense to understand spending $10 billion is better than wasting $50 billion, I really can’t help them.”

Prince concluded the defense of his op-ed by channelling Trump’s “so-called judge” slam — applying it to his critics in the media: “if so called journalists are going to scrutinize they should review all the compensation received by the media talking head generals and the pay they receive from the defense industry.”

Prince donated $250,000 to the Trump campaign and then, like magic, his anti-LGBT Christianist sister became Secretary of Education.

NYTimes: Erik Prince: Contractors, Not Troops, Will Save Afghanistan
ME: Yeah, let’s give Trump a PRIVATE ARMY–how could that go wrong?!

Is there a rationale for having contractors play this role instead of U.S. troops other than “Erik Prince runs a contracting company”? pic.twitter.com/aPyVmw0IpD

The NYT letting Erik Prince to use the Op Ed page to argue for a strategy that would enrich him is an odd choice https://t.co/1aagDnbgzZ