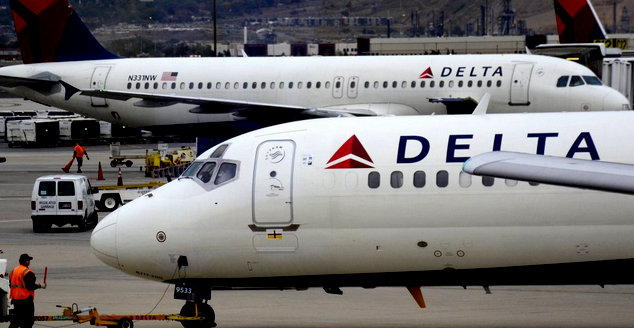 An unruly passenger who authorities say was trying to open an exit door on a Delta Air Lines flight to Beijing fought with the cabin crew and a passenger and was conked over the head by a flight attendant with two wine bottles, a criminal complaint alleges.

The suspect made an initial appearance in federal court Friday in Seattle, hearing the criminal complaint of one count of interfering with a flight crew. That carries a penalty of up to 20 years in prison and fines up to $250,000.

The battle in the galley near the cockpit of Delta Flight 129, which was headed to Beijing with 210 passengers and 11 crew aboard, began as the airliner cruised near Canada’s western coast about an hour into the flight.

As the aircraft made the return back to Seattle, the flight attendants and several passengers tried to subdue Hudek. The scuffle got so chaotic that Hudek allegedly punched one of the crew members in her face and hit a passenger over the head with a wine bottle.

Hudek then tried to open the exit door again. According to the complaint, when another passenger stepped in to help, Hudek allegedly hit the man several times. A flight attendant was eventually able to grab two wine bottles and hit Hudek over the head with them, breaking one of the bottles.

Several other passengers got involved and were able to hold Hudek down long enough for zip ties to be placed on him. Even while restrained, Hudek “remained extremely combative,” the complaint states.

Previous Trump At G20 Summit: The Only Bad Thing Ivanka Has Going Against Her Is That She’s My Daughter
Next BRITAIN: PM Theresa May Celebrates London Pride, Vows To Fight Anti-LGBT Hate Crimes [VIDEO]