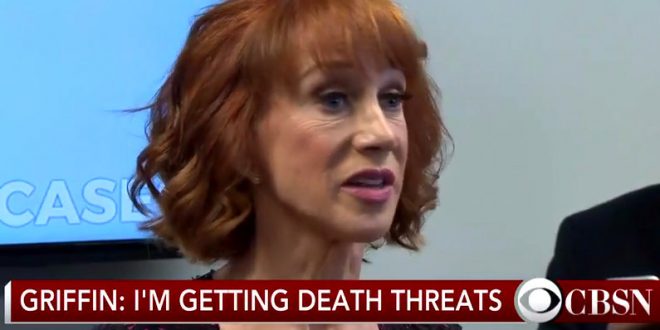 Kathy Griffin: I Feel Like My Career Is Over [VIDEO]

In a live-streamed press conference held this afternoon, Kathy Griffin again apologized for her Trump photo stunt and declared that she feels like her career is over. Reuters reports:

Griffin has lost sponsorships and jobs, including her role as co-host of CNN’s New Year’s Eve coverage with journalist Anderson Cooper, since a photograph and video from the shoot appeared on social media on Tuesday. President Trump said the image of Griffin with the gory mask resembling him was “sick” and that it had traumatized his family, especially his youngest son, 11-year-old Barron. Trump’s oldest son, Donald Jr., called for employers to drop the comedian.

“I don’t think I will have a career after this. I’m going to be honest, (Trump) broke me,” said Griffin, 56, a two-time Emmy-winning performer known for her deliberately provocative brand of humor. “What’s happening to me has never happened ever, in the history of this great country, which is that a sitting president of the United States and his grown children and the first lady are personally, I feel, trying to ruin my life – forever,” she said.