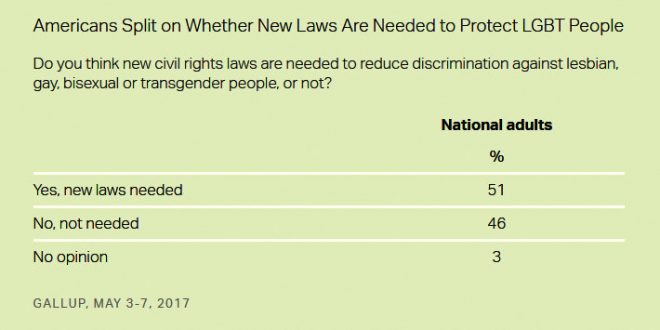 Americans are about evenly divided on whether new civil rights laws are needed to protect lesbian, gay, bisexual and transgender people. Fifty-one percent of U.S. adults say such laws are needed, while 46% say they are not.

These data, from Gallup’s annual Values and Beliefs poll conducted May 3-7, come as Democratic members of Congress plan to reintroduce a bill that would provide protections for LGBT people from housing, employment and other forms of discrimination. The bill’s potential for passage is unclear, as few in the majority Republican caucus have given their support.

Among key political and demographic subgroups, support for new LGBT protections is highest among liberals (76%) and Democrats (67%), both of whom have typically been advocates for LGBT issues. By contrast, Republicans (27%) and conservatives (29%) are the least likely to say new laws are needed, echoing positions often taken by GOP political leaders.

A more detailed breakdown of the results is at the link. Previous Sweden Drops Rape Investigation Against Assange
Next Tony Perkins Flips Out After US Embassy Flies Rainbow Flag, Calls On Rex Tillerson To “Put A Stop” To It