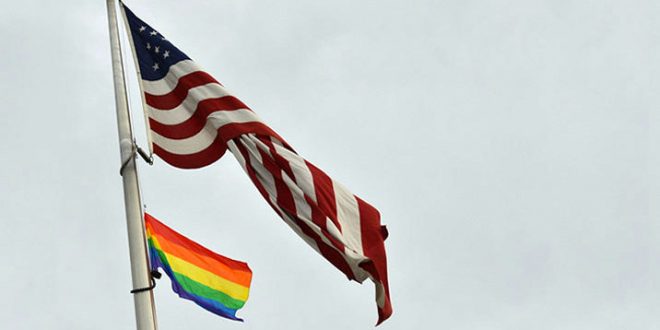 Tony Perkins Flips Out After US Embassy Flies Rainbow Flag, Calls On Rex Tillerson To “Put A Stop” To It

Yesterday, the U.S. Embassy in Macedonia posted this on Twitter: “We’re flying the rainbow flag today to commemorate the International Day Against Homophobia, Transphobia, & Biphobia.” This kind of activism is hardly likely to endear our country to the Macedonians.

The former Yugoslav republic is facing a political crisis in the wake of scandal, a refugee crisis as a transit point for those fleeing the Middle East for Europe, and an economic crisis, with one of the highest unemployment rates in Europe (over 20 percent).

It also faces internal divisions between the mostly Orthodox Macedonian majority and a mostly Muslim Albanian minority. One thing they have in common, however, is opposition to the radical sexual agenda of LGBT activists.

According to a 2015 poll, 89 percent of Macedonians oppose redefining marriage for the benefit of homosexual couples — which is probably why their legislative assembly voted 72-4 to amend the nation’s constitution to define marriage as the union of one man and one woman. In another poll, 78 percent said they would oppose a political party that promoted “LGBTI rights.”

Even 55 percent of the LGBTI population in Macedonia opposes “gay pride” events. Most of the Balkans and Eastern Europe feel the same way, which is one reason why FRC’s Travis Weber and Peter Sprigg will be traveling next week to Budapest, Hungary to meet with international pro-family activists at the World Congress of Families.

I had assumed the Macedonian embassy was an outlier among U.S. diplomats, until I checked the State Department’s main website and found the lead article there was highlighting “LGBT Rights and Public Service,” in a blog post by the U.S. Ambassador to Vietnam — who identifies as gay.

The Obama administration’s promotion of this agenda abroad reflected woefully misguided priorities — and the New York Times admitted it might be doing more harm than good, even to the people it was supposed to help. It is time for President Trump and Secretary of State Rex Tillerson to put a stop to the use of taxpayer dollars for this kind of left-wing activism, and focus on more urgent needs in our foreign policy.