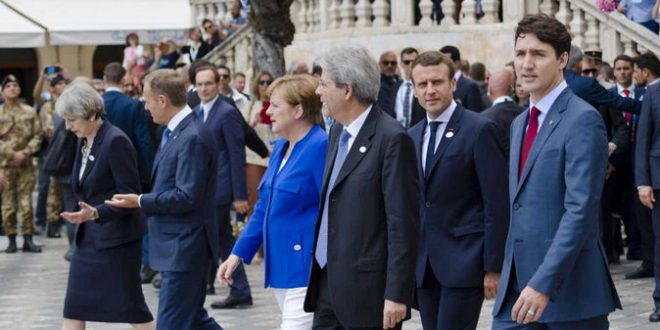 Trump Only G7 Leader Not To Hold Press Conference

President Trump was the only world leader not to give a press conference following the G7 summit Saturday, adding to already existing tension between the president and the press.

The Trump administration did offer a press briefing after the summit by the president’s National Security Adviser H.R. McMaster and National Economic Council Director Gary Cohn. The briefing, which was given off-camera but on-the-record, took place around the same time other world leaders offered their post-summit press conferences.

According to a report by The Washington Post, journalists at the briefing by Cohn and McMaster were frustrated as the two officials refused to comment on reports that Trump’s senior adviser and son-in-law Jared Kushner discussed setting up a secret communications channel between the Trump transition team and Moscow.

Breitbart has a boner over Trump’s evasion of the press:

President Donald Trump ignored the custom of holding a press conference to conclude his trip abroad, choosing, instead, to celebrate his successful trip with a speech to the troops. “I think we hit a home run no matter where we are,” Trump said as he spoke to members of the military at a Naval Air Station in Sigonella, Italy, celebrating his first trip overseas as president. “I can think of no better way to conclude our first foreign trip than to spend the time with you right here.”

Not a news conference !! No cameras and 1st POTUS to avoid reporters since these summits started decades ago https://t.co/aJf7gQNPgj

As Trump takes off from Sicily without answering questions, Canadian Prime Minister Justin Trudeau is holding a news conference.