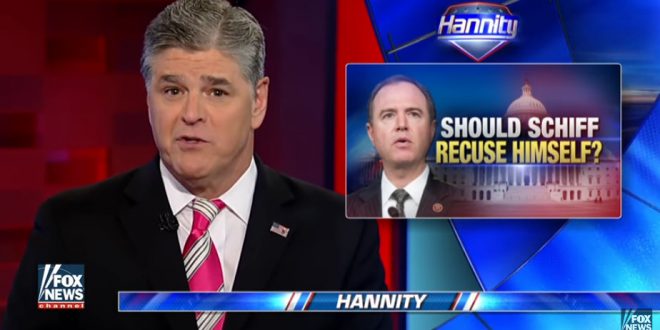 Wednesday on Fox News Channel’s broadcast of “Hannity,” host Sean Hannity suggested in what he called a “mini-monologue” that perhaps it was Rep. Adam Schiff (D-CA), the ranking Democrat on the House Intelligence Committee, that he should recuse himself from the committee’s investigation into alleged ties the 2016 Trump campaign had with the Russian government.

Hannity based his argument on Schiff’s statements on MSNBC a day earlier, which he said showed Schiff’s bias. “As we explained earlier tonight, the alt-left, destroy Trump propaganda media — they are doing their best to smear and slander and besmirch Congressman Devin Nunes,” Hannity said. “Now it is Congressman Adam Schiff who is openly showing bias in this case.”