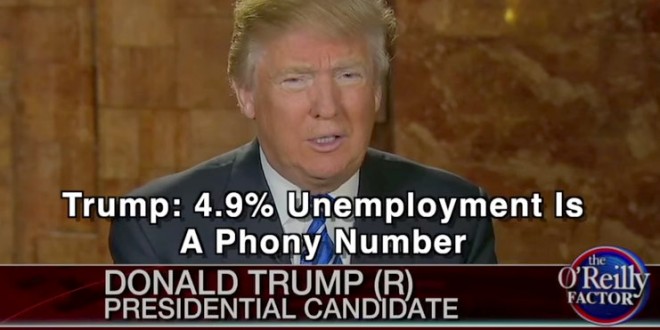 During his campaign for president, Donald Trump frequently said the official U.S. unemployment statistics were “phony” and that the real jobless rate was many times higher than the government said. On Friday, he touted the numbers in the first monthly jobs report released under his administration. “Two-hundred twenty-seven thousand jobs,” Trump said at the White House. “Great spirit in the country right now, so we’re very happy about that. I think that it’s going to continue, big league. We’re bringing back jobs.”

Trump used to love complaining about the Labor Department’s monthly report, which tallies the number of jobs gained and the unemployment rate. The unemployment rate hovered around 5 percent for most of the presidential campaign, which economists consider a decently low number. “Don’t believe those phony numbers when you hear 4.9 and 5 percent unemployment,” Trump said last February. “The number’s probably 28, 29, as high as 35. In fact, I even heard recently 42 percent.”