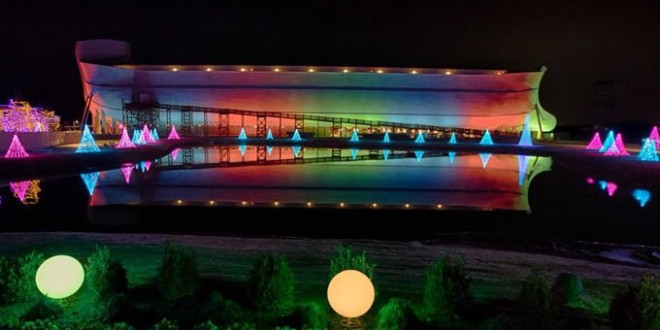 Back in December, I posted this quote from creationist nutjob Ken Ham:

In recent times the rainbow (albeit with some different colors) has come to represent freedom, love, pride, a new era, and, specifically, the LGBTQ movement. But the rainbow itself wasn’t designed to be a symbol of freedom, love, pride, or the LGBTQ movement. God created this beautiful, colorful phenomenon and designated it as a sign of His covenant with Noah and his descendants forever.

Sadly, people ignore what God intended the rainbow to represent and proudly wave rainbow-colored flags in defiance of God’s command and design for marriage. Because of this, many Christians shy away from using the rainbow colors. But the rainbow was a symbol of God’s promises before the LGBTQ movement—and will continue to be after that movement has ended. As Christians, we need to take the rainbow back and teach our young people its true meaning.

Today Hemant Mehta reports at The Friendly Atheist that the rainbow lights will now be permanent. He adds:

So the rainbow was a reminder from God that he hasn’t slaughtered us yet. Delightful. People also pointed out it wasn’t a good rainbow. The colors repeated themselves and didn’t go in the right order. It was pretty much what you’d expect from someone who doesn’t understand how science works. There you have it. Let the Bizarro Creationist Rainbow forever remind you that the Christian God is synonymous with death, destruction, and genocide. He loves you, and that’s why he has to constantly threaten you. It’s just another awful lesson kids will learn if they visit Ark Encounter.