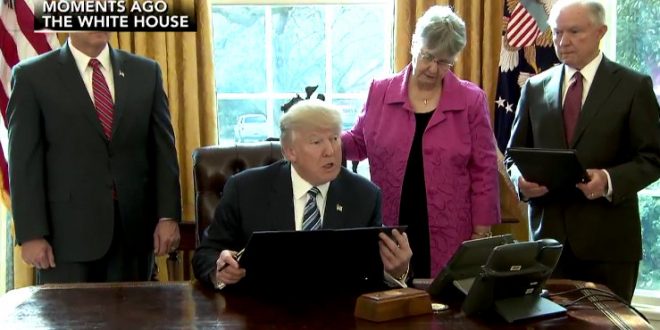 If the pace of confirmations from the Senate remains historically glacial, the pace of executive orders still seems rather brisk into Donald Trump’s third week as president. The two streams crossed in the Oval Office this morning, as Jeff Sessions took the oath of office as Attorney General administered by Vice President Mike Pence. Sessions then presented Trump with three EOs for the Department of Justice for Trump’s signature.

Clearly, the new administration has discovered that presidential signing ceremonies make for good optics. (Apparently so does the mere presence of Jeff Sessions.) None of these EOs are terribly remarkable, and may not even require a formal EO for effectiveness. Sessions could have probably accomplished all three of these action items without them, but two of the three come straight from Trump’s campaign promises — to protect cops (“Blue Lives Matter”) and to reduce violent crime.

Consider this a free media victory lap. At some point, though, the White House risks diluting the impact of these photo ops, which presumably will disappear anyway when the rest of Trump’s Cabinet is finally allowed by the Senate to start doing their jobs.

Watch @VP Mike Pence swear in Jeff Sessions as the next attorney general of the United States. pic.twitter.com/RNnfEZmS2J

Previous LIVE VIDEO: White House Press Briefing
Next Sean Spicer: Kellyanne Conway Has Been “Counseled” For Her Ivanka Commercial And That’s It [VIDEO]