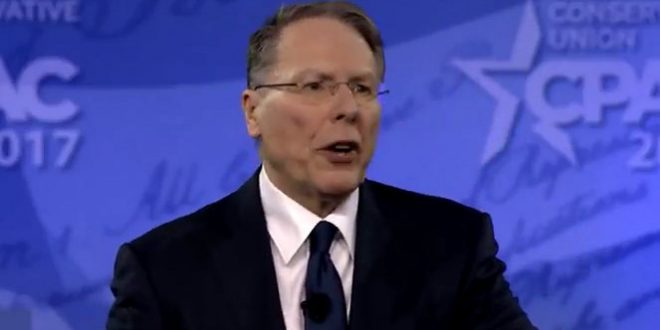 The NRA’s top gun revealed a paranoid vision of the world in a Friday speech that painted Democratic protesters as well-paid criminals bent on terrorizing the country. National Rifle Association CEO Wayne LaPierre unloaded on the left, saying its demonstrators are paid $1,500 a week to wreak havoc.

“They’re angry. They’re militant and they’re willing to engage in criminal violence to get what they want,” LaPierre said at the annual Conservative Political Action Conference in Maryland. “Many of these people literally hate everything America stands for.”

“If you’re a member of the leftist media or a soldier for the violent left, a violent criminal, a drug-carteled gang member or a would-be terrorist, hear this,” LaPierre said,” you’re not going to win and you will not defeat us.”

LaPierre cheered President Trump and chillingly exhorted the NRA’s 5 million members to be prepared to fight back. “With all the threats facing America today, your right to protect yourself and your family may be more relevant and urgently needed than ever before,” he said.