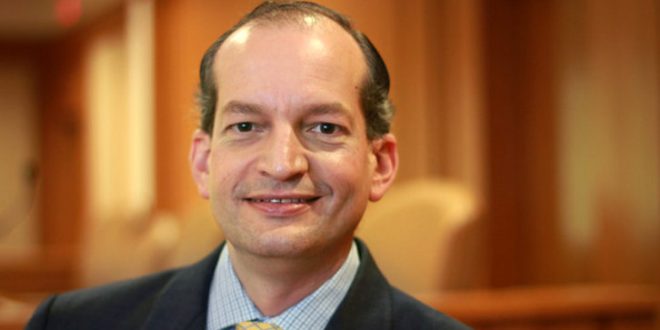 CKE Restaurants CEO Andy Puzder withdrew his nomination Wednesday ahead of his confirmation hearing amid mounting bipartisan opposition. In a statement, Puzder did not specify why he dropped out but noted that he made the decision “after careful consideration and discussions with my family.”

Trump will announce a replacement amid a slog to confirm his other Cabinet nominees. Puzder’s withdrawal also comes as the White House deals with the aftermath of National Security Advisor Michael Flynn’s resignation.

After graduating from Harvard Law School, Alexander Acosta clerked for Judge Samuel Alito on the Court of Appeals for the Third Circuit for a year before going to work at the Washington, D.C. law firm Kirkland & Ellis.

Acosta then served as a member of the National Labor Relations Board for about a year, from December 17th, 2002 through August 21st, 2003. Acosta was appointed to that position by President George W. Bush. According to Acosta’s biography on the Florida International University website, he authored over 125 opinions while serving on the board.

Following his stint on the National Labor Relations Board, Acosta was appointed to the role of assistant attorney general for the U.S. Department of Justice’s Civil Rights division. He was the first Hispanic to serve as an assistant attorney general for the U.S. government. This was another position that he was appointed to by President George W. Bush.