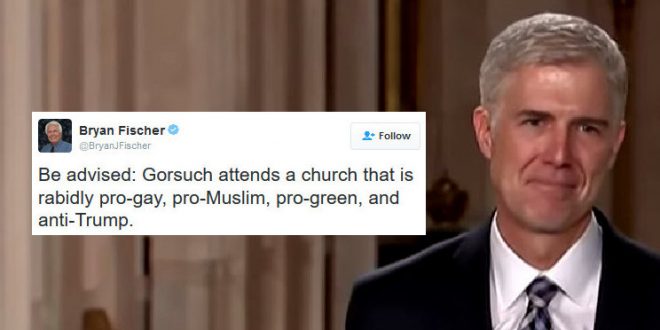 He has been described as ‘the heir to Scalia’ and is a religious conservative whose appointment to the Supreme Court was greeted with jubilation on the pro-gun, anti-abortion Right. But DailyMail.com can reveal that Neil Gorsuch’s own church, in Boulder, Colorado, is a hotbed of liberal thinking – and is led by a pastor who proudly attended the anti-Trump Women’s March in Denver the day after the President’s inauguration.

And in a twist that may surprise religious conservatives who welcomed Gorsuch’s appointment, church leader Rev. Susan Springer, 58, has said she is pro-gay marriage and offers blessings to same sex couples. The church, which trumpets its ‘inclusive’ ethos on its website, also operates a homeless outreach program that includes an LGBT center and a sexual health clinic in a pamphlet setting out the best places for those in need of help.

Leaders of the church have also organized opposition to a local gun rights ordinance and spoken out against Trump’s immigration ban. Over the weekend the Huffington Post reported that Gorsuch once gave his blessing to a gay staffer’s marriage.

Goodbaum, now an attorney in Connecticut, recalled fondly their conversation on the week of the wedding: “He said, ‘This is a wonderful thing. You’ll see how your relationship grows.’” Goodbaum, who in 2009 served as a clerk for the Colorado federal appeals court judge, added: “I have never felt the least whiff from him of homophobia or intolerance toward gay people.”

But there’s also this:

Writing in National Review in 2005, then as a Washington lawyer, Gorsuch agreed with Scalia that certain civil rights of minority groups should be left to the voters and legislatures, and he used marriage equality as an example. He displayed a will to discriminate in joining an opinion in the Hobby Lobby case, backing religious exemptions, while he was on the 10th Circuit Court of Appeals (a decision upheld by the Supreme Court in a 5-4 split in 2014).

“All of us face the problem of complicity,” Gorsuch wrote, opining that the government shouldn’t compel people with “sincerely held religious beliefs” to be complicit in “conduct their religion teaches them to be gravely wrong.” If asked the question about sodomy in a confirmation hearing, however, Gorsuch, smooth and camera-ready, would likely deflect, as court nominees often do, or maybe tell us something about the sodomy and marriage equality decisions being “settled law” ― which of course is only settled until justices unsettle it again.

Be advised: Gorsuch attends a church that is rabidly pro-gay, pro-Muslim, pro-green, and anti-Trump. https://t.co/7az8qnAGKk