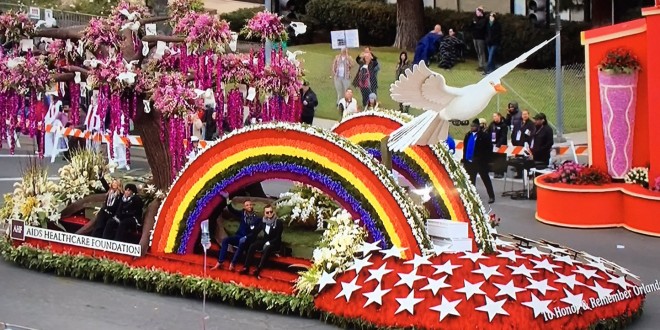 Survivors of the Pulse massacre took center stage at the 128th Rose Parade. Victor Baez Febo and Isaiah Henderson waved to the cheering crowd Monday at the annual New Years Day celebration in Pasadena, Calif. They rode on a float commissioned by the AIDS Healthcare Foundation and Impulse Group United, which honored the 49 victims and dozens of survivors of last year’s shooting at the Pulse Nightclub.

Survivor Jahqui Sevilla and Pulse’s owner Barbara Poma were also on the float, according to a press release from AHF. Other riders — who had aided in Orlando’s healing and recovery — included Patty Sheehan, an out city commissioner of the Florida city, case worker and HIV counselor Joel Morales, and Impulse Group Orlando’s president Corey Lyons and vice president Gustavo Marrero.

Twice during the parade 49 live doves were released from the float, which won the 2017 award for “most beautiful non-commercial” entry.