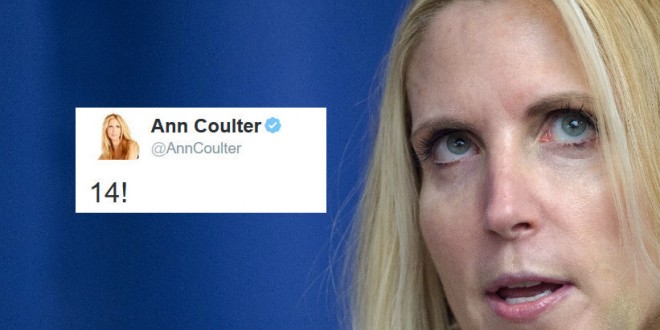 Ann Coulter today spawned celebration from Twitter’s Nazis by simply posting the number 14. The number is well-known internet shorthand for the “Fourteen Words” – a slogan coined by white supremacist David Lane and inspired by a paragraph from Adolf Hitler’s Mein Kampf, which is currently a best-seller in Germany after copyright protections expired last year.

Lane’s fourteen words: “We must secure the existence of our people and a future for white children.” A second 14-word slogan from Lane is also often cited: “Because the beauty of the White Aryan woman must not perish from the earth.”

“What we must fight for is to safeguard the existence and reproduction of our race and our people, the sustenance of our children and the purity of our blood, the freedom and independence of the fatherland, so that our people may mature for the fulfillment of the mission allotted it by the creator of the universe. Every thought and every idea, every doctrine and all knowledge, must serve this purpose. And everything must be examined from this point of view and used or rejected according to its utility.”

White supremacists and Nazis often combine the numbers 14 and 88, the latter of which stands for “H” – the eighth letter of the alphabet and therefore “Heil Hitler.”

@AnnCoulter We must secure the existence of our People and a future for White children.

@AnnCoulter Welcome to the dark side. pic.twitter.com/imDJESRlrV

We love you @AnnCoulter!!! #AltRight pic.twitter.com/mmdyo13T4G