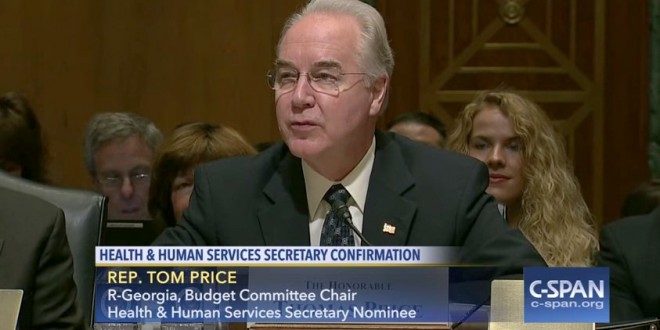 Rep. Tom Price refused to say how aggressively he’ll implement President Donald Trump’s order instructing federal agencies to pare back Obamacare — and he refused to promise that Obamacare enrollees wouldn’t lose coverage as a result of the order.

Price, Trump’s pick to run Health and Human Services, dodged questions from lawmakers Tuesday about whether Trump’s order would force people from their current Obamacare coverage, despite promises from many Republicans they want to ensure the 20 million people insured through the law wouldn’t be hurt by efforts to replace it.

He also wouldn’t say whether HHS would wait until Congress readies a replacement plan before taking steps to dismantle the health care law. Price told the Senate Finance Committee, which will vote on his nomination, that he would promise to put “patients at the center of health care,” declining to tackle the questions directly.

No matter what the question or the questioner, Price answered most with a version of this: “Every single American will have access to coverage that is affordable.” He often referred to people having the “option” or “opportunity” for care, which is different than a guarantee.

Trump has given conflicting signals about his plans for health care if the Affordable Care Act is repealed. He has said that all Americans will have health insurance that is better and less expensive than current plans, but he has also scaled back that claim in other comments.

Price noted often that with Medicaid currently it isn’t always true that “coverage equals care” as many doctors won’t accept it because of low reimbursement. Pressed on whether he would require Medicare beneficiaries to pay for more of their care, as he has advocated in the past, Price didn’t back down.