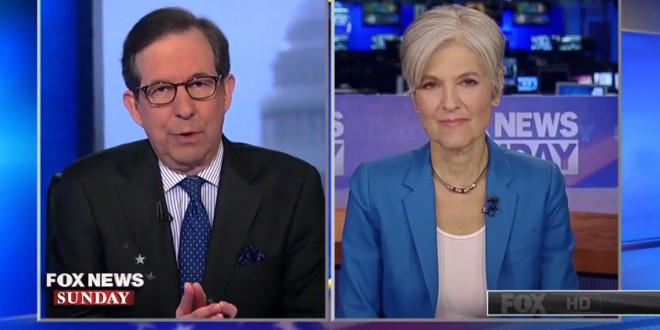 Green Party candidate Jill Stein and Fox News Sunday host Chris Wallace engaged in a pretty combative exchange today while discussing Stein’s recount efforts, with Wallace trying to get Stein to admit that there have been no recounts that have switched tens of thousands of votes.

“There’s not a chance in the world here, Dr. Stein, that the vote is going to change in those three states,” Wallace exclaimed, pointing out the margin in Wisconsin, Michigan and Pennsylvania. She continued to bring up Ohio and claim that with a hand recount thousands of votes can be counted and change the results in Michigan and Wisconsin.

The conversation eventually switched to the amount of money Stein has raised for her recount efforts with Wallace wanting to know if this was really just a fundraising effort by Stein. She contended that all money raised was specifically for recount efforts and kept in a separate account.