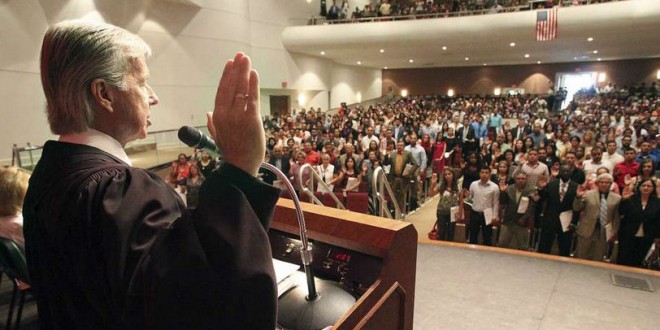 TEXAS: Judge Suspended After Telling New Citizens To Find Another Country If They Don’t Like Trump

A federal judge under fire for reportedly telling newly sworn-in U.S. citizens last week that Donald Trump is “your president, and if you don’t like that, you need to go to another country,” was suspended Monday from overseeing further citizenship ceremonies. U.S. Magistrate Judge John Primomo said he was not trying to tell the new Americans to leave if they didn’t like Trump.

Despite his assurances, the U.S. district judges at San Antonio’s federal courthouse — who appoint and oversee federal magistrate judges — issued a statement saying they “have determined that he will no longer be handling citizenship ceremonies, and the judges are meeting with him to see how this matter can be resolved and concluded.”

Primomo has been a go-to judge for such ceremonies since 1989, and has sworn in more than 100,000 new citizens. The ceremonies are held roughly once a month, in various venues, and can include live bands, singing, speeches from guests or testimony from participants.

The TV report said Primomo also criticized American protesters who carry signs saying Trump is “not my president,” including some in San Antonio. And Primomo lashed out against pro football players who take a knee during the national anthem, the KENS story said.

“I detest that, because you can protest things that happen in this country; you have every right to,” Primomo said. “You don’t do that by offending national symbols like the national anthem and the flag of the United States.”