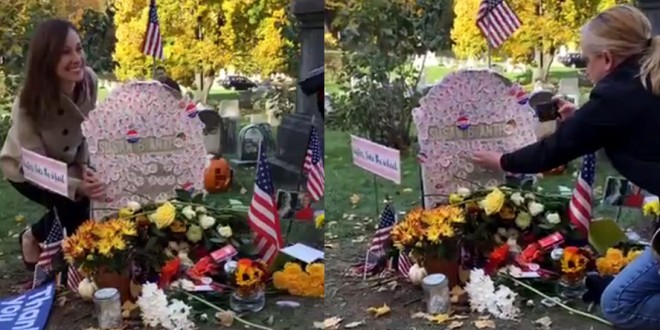 NEW YORK: Hundreds Wait In Hour-Long Line To Place “I Voted” Stickers On Grave Of Susan B. Anthony

JMG reader Bess tips us that New Yorkers are waiting in a hour-long line at the Rochester gravesite of legendary suffragette Susan B. Anthony so that they can place their “I Voted” sticker on her tombstone. From New York Magazine:

On November 8, 1872, Susan B. Anthony was arrested for illegally casting a ballot in the presidential election. More than a century later, single women are the nation’s most potent political force. Anthony’s grave in Rochester, New York, is a popular destination for women who want to honor her memory by doing their civic duty, and according to the Democrat & Chronicle, this year the city’s mayor is making it even easier to do so.

Mt. Hope Cemetery, where Anthony is buried, usually closes at 5:30 p.m., but on Election Day, it’ll be open until voting ends. “Visiting Susan B. Anthony’s gravesite has become an Election Day rite of passage for many citizens,” Rochester’s mayor told the paper in a press release. “With this year’s historically significant election, it seems right to extend that opportunity until the polls close.”