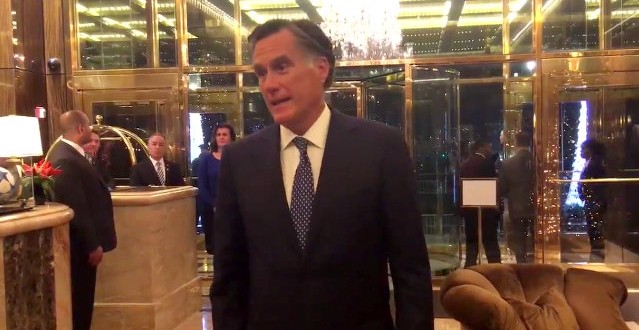 President-elect Donald Trump and 2012 GOP presidential nominee Mitt Romney continued their awkward reconciliation on Tuesday, dining together as Trump weighs whether to pick one of his onetime fiercest critics to lead the State Department.

As Romney lobbies for the job, he made his starkest remarks yet unequivocally praising the incoming president as someone who “can lead us to that better future” — a complete 180-degree turn from blasting Trump as a “phony” and “fraud” just months ago.

After leaving the dinner at the Jean-Georges restaurant at the Trump International Hotel in New York City, Romney told reporters they had a “wonderful evening” and that he’s been impressed with Trump’s transition so far and many of his Cabinet picks.

“We had another discussion about affairs throughout the world, and these discussions I’ve had with him have been enlightening, and interesting, and engaging,” Romney said.

“He won the general election and he continues with a message of inclusion and bringing people together and his vision is something which obviously connected with the American people in a very powerful way,” he continued.

Here’s Mitt Romney talking to reporters after his dinner with Trump at Jean George’s. pic.twitter.com/nzj8FN0gug