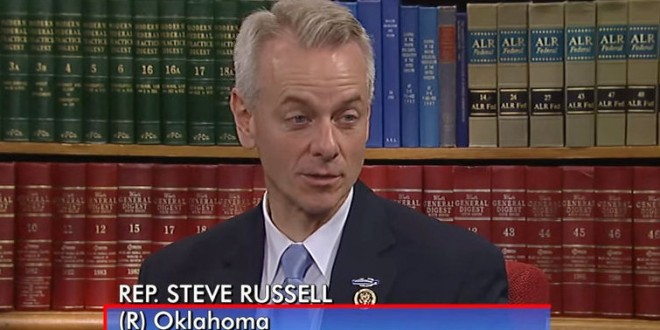 A glimmer of good news, for now. The Voice Of America reports:

A compromise version of a massive U.S. defense policy bill omits controversial provisions such as a clause Democrats said allowed discrimination against homosexuals and a requirement that women register for the draft.

The $618.7 billion National Defense Authorization Act, or NDAA, will likely come up for a vote in the House of Representatives late this week, and the Senate next week, senior committee staff members told reporters at a background briefing on Tuesday.

During months of negotiations, Republicans and Democrats on the Senate and House Armed Services committees agreed to eliminate a “religious freedom” provision Democrats said would have let federal contractors discriminate against workers on the basis of gender or sexual orientation.

RELATED: Back in 2009, then-state Rep. Russell introduced a bill that would have opted Oklahoma out of reporting anti-LGBT hate crimes because, he said, it would hinder the state’s prosecutions of corpse-fuckers. Seriously.

“The federal government should not be creating a special class of people, and that is just what they did when they passed and signed this bill,” Russell said. “All crimes against another person have some level of hate in them, and people can be assured that our laws that protect people against crimes such as murder are sufficient to protect everyone.” Russell said because the government has decided to intervene on issues of morality, he is worried that religious leaders who speak out against any lifestyle could be imprisoned for their speech. “The law is very vague to begin with,” Russell said. “Sexual orientation is a very vague word that could be extended to extremes like necrophilia.” Russell said he is also concerned if someone is attacked and killed for his or her sexual orientation, the suspect could pass the blame onto a religious leader who preached out against the lifestyle of the victim who was attacked.