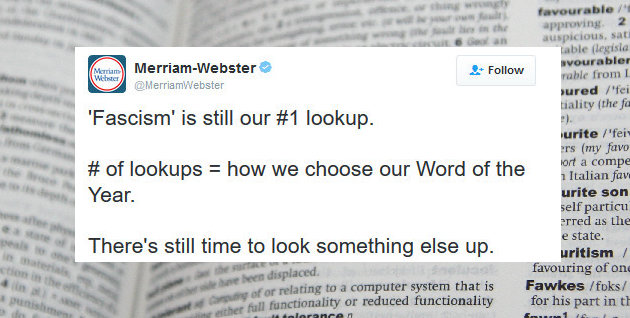 Somehow the right wing Washington Examiner manages not to mention Trump in their story about this tweet, which was flagged for us by JMG reader John.

The good people at Merriam-Webster practically begged users to search for any word other than “fascism” so the dictionary company could avoid making it the word of 2016. In a tweet posted Tuesday afternoon, the company said it’s on track to name fascism its word of the year. It really doesn’t want to do that. Other dictionaries have already made their choice for word of the year. The Oxford dictionary chose “post-truth” for its word of the year and Dictionary.com chose “xenophobia.”

# of lookups = how we choose our Word of the Year.

There's still time to look something else up.