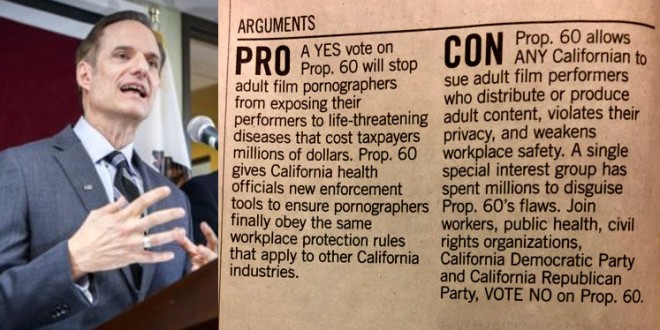 From the Los Angeles Daily News:

A state initiative that called for enforcing condom use during all adult film production sites across California failed to win voters over, according to results released on Wednesday.

Almost 54 percent of all state voters chose to pass on Proposition 60,which would have made producers prove that condoms were used, pay for performers’ workplace-related medical examinations and vaccines and be licensed by Cal-OSHA, the state’s workplace safety agency, every two years. They would also be subjected to hefty fines if condoms aren’t used.

But adult film performers opposed the initiative because they say it would turn viewers into critics, resulting in lawsuits and harassment. Some actors fear that under the law, stalkers would be able seek them out and do harm if their real names were listed in public documents such as lawsuits filed over possible violations of the measure.

“This was a tremendous victory, not only for adult performers, but for science over stigma, and facts over fear.” said Mike Stabile, spokesman for the Free Speech Coalition, a Canoga Park-based trade organization that represents the adult entertainment industry.

From an op-ed published yesterday by the Los Angeles Times:

In truth, Proposition 60 is a reflection of the ways in which people living with HIV are stigmatized, persecuted and policed across the country. Currently, 33 states have laws on the books that make it a crime to expose a partner to the virus. In 28 states, it’s even a felony to do so.

This might sound like a reasonable idea, one that advocates safer sex between individuals, but criminalizing HIV actually serves to force people further into the closet. How the U.S. legal and political system treats HIV is unsafe, unjust and overdue for reform, and the passage of Proposition 60 would only make the problem worse.

In addition to virtually all political parties, Prop 60 was opposed by AIDS Project Los Angeles and the San Francisco AIDS Foundation.

Previous Omarosa: Donald Trump Has Kept An Enemies List And Every Critic Must Now Bow Down To Him [VIDEO]
Next INSERT JOKE: Trump Tower Fortified With Dump Trucks