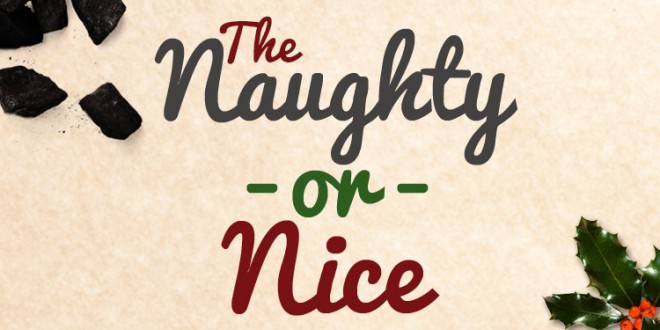 Via press release from the American Family Association:

As the 2016 Christmas shopping season begins full swing, AFA has prepared its annual Naughty or Nice retailer list. We have taken the top national retailers and reviewed their websites, media advertising and in-store signage in an effort to help you know which companies are Christmas-friendly.

There are secular forces in our country that hate Christmas because the word itself is a reminder of Jesus Christ. They want to eradicate anything that reminds Americans of Christianity. That is why it is important to remind governments and companies to keep the word Christmas alive. AFA wants to keep Christ in Christmas and Christmas in America.

AFA reviewed up to nine areas to determine if a company is “Christmas-friendly.” Print media (newspaper inserts), broadcast media (radio/television), website and/or personal visits to the store helped determine a retailer’s rating. If a company’s ad has references to items associated with Christmas (trees, wreaths, lights, etc.), it was considered as an attempt to reach “Christmas” shoppers. Previous Trump: Yes, I’ll Live In The White House
Next JERUSALEM: Chief Rabbi Declares Gays To Be “Cult Of Abomination” Who Should Be Executed [VIDEO]