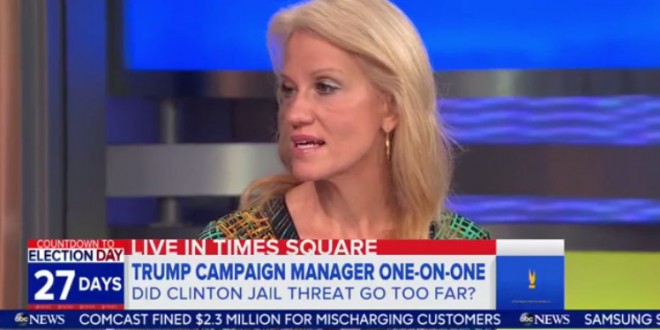 Kellyanne Conway On Donald Trump’s Threat To Jail Hillary: We’ll Have To See Once He Is Elected [VIDEO]

Donald Trump’s campaign manager says it’s not certain he’ll follow through on his vow to appoint a special prosecutor to go after Hillary Clinton if he becomes president. Kellyanne Conway says, “We’ll have to see, if he’s elected president, if that makes any sense.”

On ABC’s “Good Morning America,” Conway was asked Wednesday about Trump’s repeated suggestions that he’d use the power of the presidency to put Clinton behind bars for alleged misdeeds. She said, “It wouldn’t be up to him whether or not she goes to jail. That would have to be fully adjudicated through the regular channels like it would be for anyone else.”

Conway says Trump is channeling the frustrations of many people who think Clinton plays by a different set of rules. As for Republican leaders who’ve abandoned or wavered on Trump, Conway says his campaign wants the support of anyone who will endorse Trump.

WATCH: “Trump is channeling frustration of millions of Americans.” – @KellyannePolls on “jail” comment at #debate https://t.co/pOI6UxxhGG

Previous Tony Perkins On #Pussygate: Christian Leaders Must Support Trump No Matter How Insane He May Be
Next John Boehner: I’m Still Voting For Trump [VIDEO]