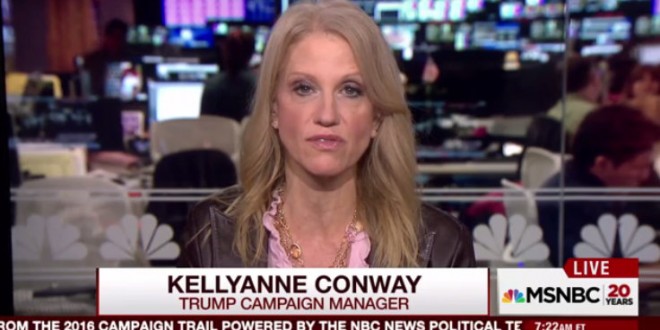 Democrats worried about their White House candidate have nobody to blame but themselves, Donald Trump campaign manager Kellyanne Conway said Monday morning, because they’re the ones who nominated a “serial liar” for president.

“I would just say that I think all along, we’ve been asking the questions about the wrong candidate. The Democrats own Hillary Clinton,” Conway said on MSNBC’s “Morning Joe.” “They made a huge mistake by nominating someone they know is a serial liar, has a history of having a casual relationship with the truth, of always putting Hillary first. And I think that we’re seeing that come home to roost here because they should own her.”

Conway said electing Clinton “would be a very risky choice” and added that America does not “need this ethical stain that has been Bill and Hillary Clinton for decades now to continue.”

“We’re going to win the election. We know that. If you’re an undecided voter, you’re very decided about Hillary Clinton,” she said. “There’s really nothing else you’re going to learn about her in these last eight to ten days that will change your mind.”

.@KellyannePolls: We don’t need this ethical stain that has been Bill and Hillary Clinton for decades https://t.co/YWA9caSDSU