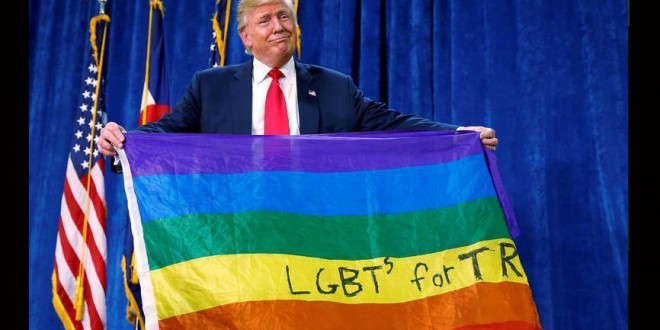 An upside-down rainbow flag with shitty lettering. Via the Denver Channel:

For the second day in a row, Donald Trump rallied Colorado voters just nine days before the November General Election on Nov. 8. The republican nominee spent Saturday in battleground Jefferson County and held another rally on the UNC campus in Greeley on Sunday.

Greeley, which is located in Weld County, is a traditionally Republican county. Trump took the stage in Greeley holding a rainbow LGBTQ flag from one his supporters. He then hinted at possible voter fraud in Colorado. “Do you think those ballots are properly counted?” Trump asked the crowd who yelled back, “No!”

For those of you new to our planet, Trump has vowed to enable the overturn of same-sex marriage and has promised to support the legalization of anti-LGBT discrimination by businesses.

Donald Trump holds up a rainbow flag with “LGBTs for TRUMP” written on it at a campaign rally in Greeley REUTERS/@carloallegri pic.twitter.com/z4LBpBwUEP