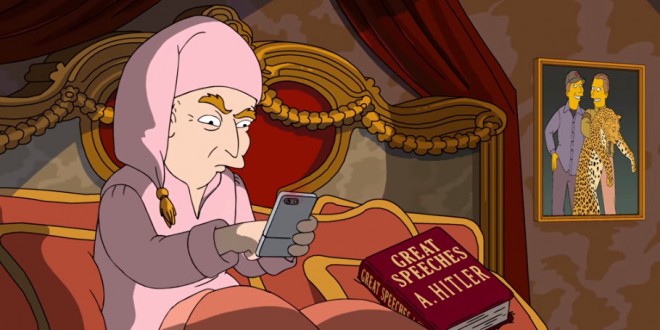 The Simpsons interrupted their summer vacation by posting a two-minute campaign ad that asks Springfield residents whether they would rather have Hillary Clinton or Donald Trump in the White House during a national crisis.

While The Simpsons don’t flatly state “I’m With Her,” they’re extremely critical of Clinton’s opponent: Trump is shown in a luxurious bedroom, up late at night tweeting about Elizabeth Warren with a book of Adolf Hitler’s greatest speeches by his side.

Previous Priebus Backs Trump On “Rigged” Debate Schedule: We’re Not Going To Disagree With Our Nominee
Next Hillary Bounces To +7 In New CBS Poll