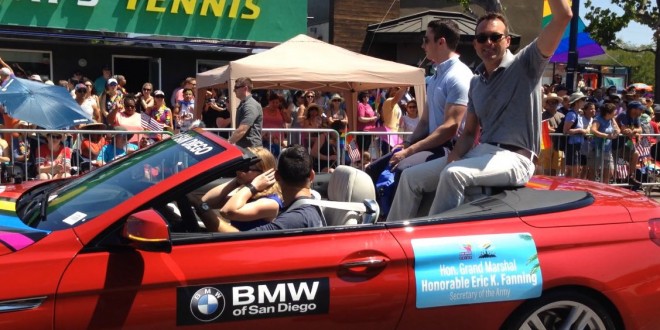 When Eric Fanning started working at the Pentagon as an aide, the “don’t ask, don’t tell” policy had just begun. The 24-year-old didn’t have gay role models in the building. A lot has changed in the United States military since then.

In May, 24 years later, Fanning was appointed secretary of the Army — becoming the first openly gay person to lead any branch of the U.S. armed forces. He’s in town this weekend to participate in San Diego Pride events, including serving as a grand marshal of Saturday’s Pride parade in Hillcrest and Balboa Park.

San Diego’s Pride parade is noteworthy as the nation’s first gay-centered parade where active-duty service members marched together with shirts identifying their status as a sailor, soldier, airman or Marine.

It was July 2011, and the ban on openly gay military service — “don’t ask, don’t tell” — was in its final months. Feeling the momentum, a contingent of troops based in San Diego County made national headlines by stepping forward in that highly public way. The following year, gay service members marched in uniform at Pride parades here and elsewhere.