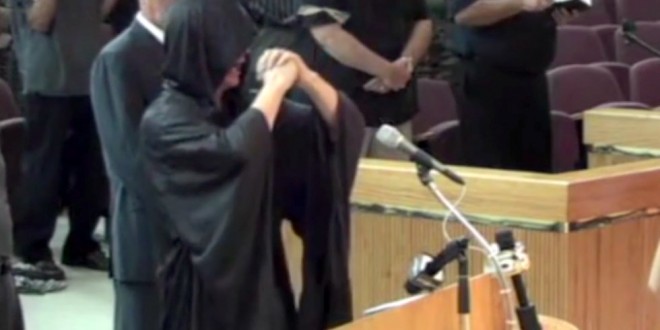 A satanic prayer held at Pensacola city council meeting was disrupted by a crowd Thursday night. Police escorted people out of the meeting. “I saw community of people come together and take a stand for what was right,” explained Bruce Gullie. The invocation was delivered by a member of the Satanic Temple. Parishioners with the United Methodist Church of Pace staged outside city hall ready to pray, while hundreds filled the seats inside.

David Suhor, co-founder of the local chapter of the Satanic Temple approached the podium, causing the crowd to stand and begin the Lord’s Prayer. Council President Charles Bare called order and told the crowd they had to be quiet or they would have to leave. Pensacola Police escorted numerous people out. Once order was regained, Suhor began his invocation. Many continued to pray. Councilmember Gerald Wingate walked out.

For those unaware, members of the Satanic Temple do not believe that Satan exists. They are atheists that advocate for the separation of church and state.