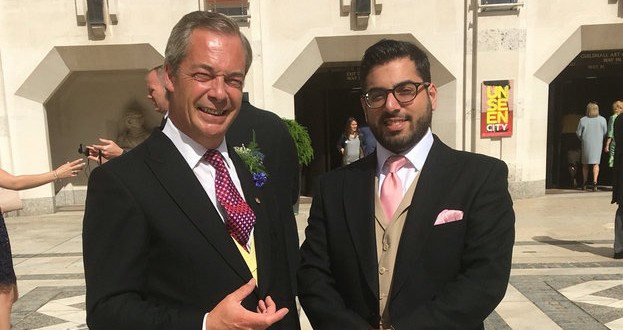 In the wake of UK Independence Party leader Nigel Farage’s resignation on Monday, Breitbart London’s Editor in Chief Raheem Kassam has told the BBC that he is considering a bid for the party’s leadership.

Speaking with Evan Davis on Newsnight, Kassam refused to rule out running for the position as other candidates considered their bids.

Davis asked Kassam, “Are you running for leader?” to which Kassam replied, “Maybe. Maybe. We’ll see”.

UKIP’s Assembly Member Peter Whittle, who joined Kassam for the segment, is also believed to be running, as is Steven Woolfe MEP, Paul Nuttall MEP, Diane James MEP, and others.

Several years ago Kassam was accused of creating his own laudatory Wikipedia page, which has since been deleted by moderators.

Previous SHORT FILM: Son Comes Out To Dad On Prom Night
Next Mat Staver Has The Mississippi Sadz