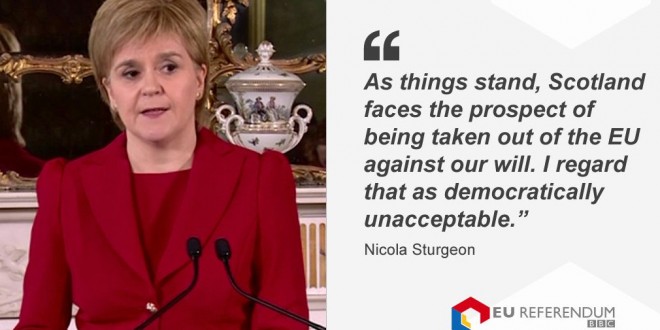 Scotland’s first minister has said a second independence referendum is “highly likely” after the UK voted to leave the EU.

Nicola Sturgeon said it was “democratically unacceptable” that Scotland faced the prospect of being taken out of the EU against its will.

She said the Scottish government would begin preparing legislation to enable another independence vote.

The SNP manifesto for May’s Holyrood elections said the Scottish Parliament should have the right to hold another referendum if there was a “significant and material change” in the circumstances that prevailed in 2014, such as Scotland being taken out of the EU against its will.

At a news conference in Edinburgh, Ms Sturgeon said: “It is, therefore, a statement of the obvious that a second referendum must be on the table, and it is on the table,” she said.