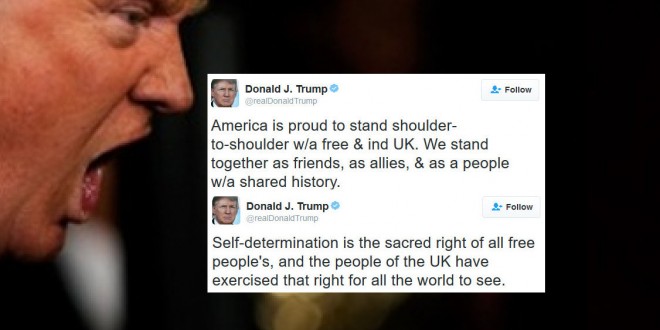 Republican presidential candidate Donald Trump celebrated Britain’s stunning vote to leave the European Union Friday during an overseas visit to Scotland, saying that the people of the United Kingdom have “taken their country back” and musing that it could benefit his Turnberry golf resort.

“I think it’s a great thing that happened,” Trump told reporters shortly after his helicopter landed at Trump Turnberry. “People are angry, all over the world. People, they’re angry.”

“When the pound goes down, more people are coming to Turnberry, frankly,” Trump added during an afternoon press conference. “For traveling and for other things, I think it very well could turn out to be a positive.”

“You’re taking your country back. You’re going to let people that you want into your country…” – #Trump on #Brexit pic.twitter.com/oQnz5pb5qb