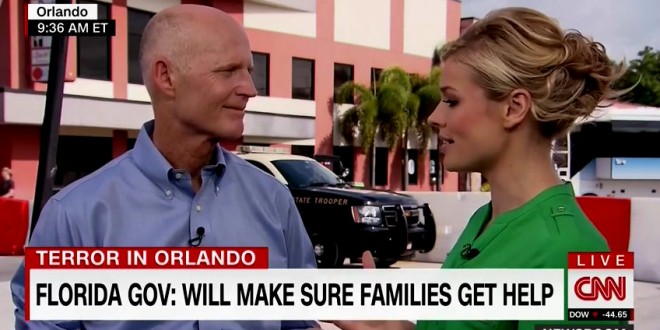 The most deadly mass shooting in the history of the United States hasn’t changed Rick Scott’s mind about the easy availability of assault weapons. Politico reports:

The Republican governor of the state that saw 49 lives taken and another 53 people injured Sunday during a shooting rampage inside an LGBT nightclub has been meeting with families of victims but said what transpired last weekend hasn’t changed his views on guns.

“Nobody would think that anybody on a terrorist watch list should have a gun,” Scott told CNN. “We all can agree that, you know, we don’t want somebody that’s gonna do something like that to be walking around with any weapons, but the Second Amendment didn’t kill anybody.”

What did kill people was the Islamic State, Scott said, adding that the U.S. should be more focused on destroying the terrorist network. The shooter, Omar Mateen, was a U.S. citizen born in New York to Afghan parents. He lived in Port St. Lucie, Florida, and pledged his loyalty to the Islamic State.

Previous Bondi Vs Cooper, Part 4: Anderson Mocked Me For Saying We Should Focus On Unity And Love [VIDEO]
Next BRAZIL: Russia’s Entire Track & Field Squad Banned From Rio Olympics Over Kremlin-Backed Doping