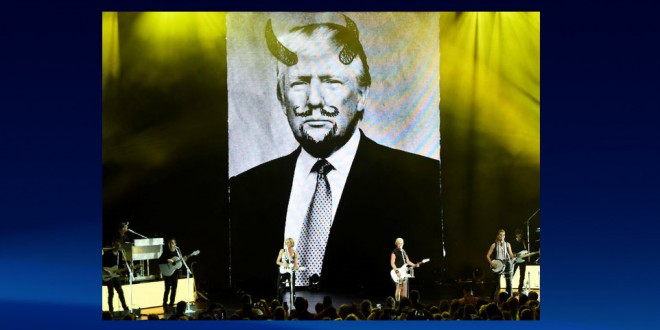 The Dixie Chicks launched their first tour in a decade on Wednesday, and if their first show is any indication, the country group still has no fear when it comes to expressing their political views. The concert was the beginning of the Chicks’ DCX World Tour MMXVI, and they started things off with a cavalcade of their old crowd favorites. When the ladies got to “Goodbye Earl” – a song about a woman who kills her abusive husband – the slideshow turned to a defaced photo of Donald Trump with a goatee, a ridiculous mustache, and devilish horns on his head.

The group is accustomed to controversy, having previously endured a firestorm that threatened to ruin the band. The Trump stunt comes approximately 13 years after Maines famously blasted George W. Bush for leading America into the War in Iraq. That mid-concert speech opened a floodgate of hatred toward the group, but the Dixie Chicks stood by their statement all the way until their hiatus in 2006.