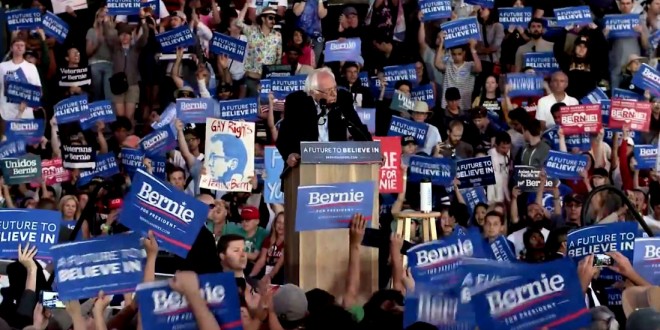 Bernie’s Final Plea: It’s All Down To Voter Turnout

Bernie Sanders today issued the below clip in which he tells supporters that only high voter turnout will give him a win in California. But he also seems to be backing away from his pledge to take his fight all the way to the convention. From the San Jose Mercury News:

Appearing to soften his resolve on the eve of the California primary, Sen. Bernie Sanders said Monday that if he didn’t win Tuesday’s California primary, he will reassess whether he will contest Hillary Clinton’s nomination at the Democratic convention in July.

“Let me talk to you after the primary here in California, where we hope to win,” Sanders told reporters who asked whether he would endorse his Democratic rival, former Sen. Hillary Clinton. “Let’s assess where we are after tomorrow.”

His comments during a news conference in Emeryville not only highlighted the importance of the delegate-rich state — 475 are at stake — but were a subtle acknowledgment that there’s a chance he might not contest the nomination as he has vowed to do.