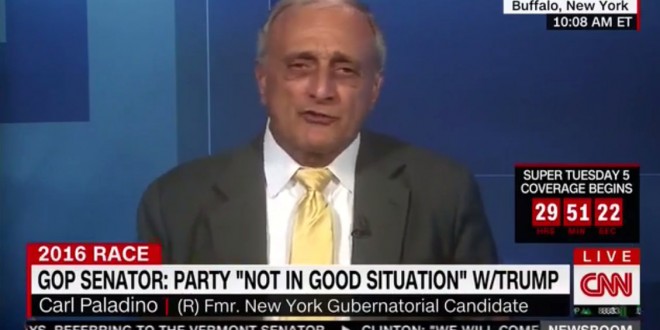 Donald Trump is “not a racist,” Carl Paladino, the honorary co-chair of his Republican campaign said Monday. “By far he’s not a racist,” Paladino told CNN after host Carol Costello mentioned a piece from The Resurgent’s Erick Erickson calling Trump’s attacks against Judge Gonzalo Curiel racist. Erickson, who has said he will never support Trump, “just likes to use the term racist,” Paladino said.

“This is incredible that you want to pull this word out and use it because it always pushes back on the white guy. That’s not fair,” he continued. “And it’s not a fair description of Donald Trump. Donald Trump might have some anxiety about this particular judge because he lives in the same real world that I do where this type of thing does go on, where the ethnicity means something, OK?”

RELATED: During his 2010 New York gubernatorial campaign, same-sex marriage opponent Paladino was exposed as the baby daddy of a ten year-old girl conceived during an adulterous affair with an employee. Paladino later threatened to “take out” a reporter who demanded proof of his claims that Gov. Andrew Cuomo was having an affair of his own. Weeks before his humiliating loss, he claimed that children are being “brainwashed into homosexuality.”