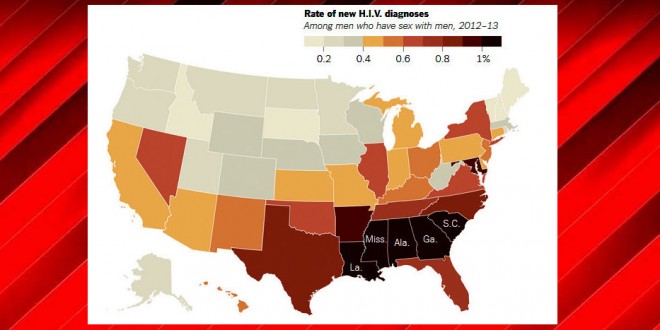 STUDY: HIV Rates Are Highest In US South

Three out of every 10 gay or bisexual men in several cities in the U.S. South have been diagnosed with the AIDS virus, three times the national rate, according to a study about how common HIV infections are in metro areas.

The study echoes other research that reported higher rates of HIV diagnoses in the South, in urban areas, and in gay and bisexual men, but it is the first to look at how common HIV diagnoses are in these men by city.

“For the first time, we can see not only the numbers, but the proportions,” said Dr. Jonathan Mermin of the U.S. Centers for Disease Control and Prevention.

According to the report, about 11 percent of gay and bisexual men had been diagnosed living with an HIV infection nationwide during the time covered by the study.

In South Carolina and Mississippi, the study estimated, 28 percent of gay and bisexual men are infected with H.I.V. In Louisiana, the estimated infection rate is 26 percent, and in Georgia, 25 percent. In Washington, D.C., which resembles a city more than a state in its demographics, it was even higher, 32 percent.

The trend was even more pronounced in cities. Researchers counted only men who had received an H.I.V. diagnosis (the statewide figures relied on estimates), and consulted previous data on how much of each city’s population was gay and sexually active. Then the researchers calculated which 25 cities had the highest infection rates among those men.