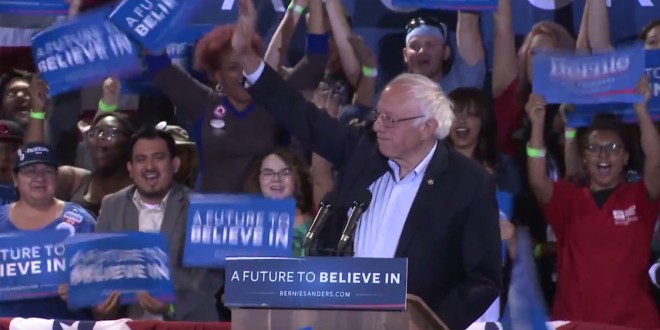 Chris Johnson at the Washington Blade has the big scoop:

A video that has stirred controversy of Democratic presidential candidate Bernie Sanders entering the stage at a rally in California to violent, homophobic rap song seems fake in comparison to a video provided by his campaign.

A handful of entertainment media blogs — The Source, Billboard and Uproxx — reported on a video of a rally that took place in Lancaster, Calif., on Thursday days before the primary in that state on June 7.

Warren Gill, a Sanders spokesperson, said when asked by the Washington Blade to comment on whether the candidate would condemn the music the video “has been doctored.”

“Someone ripped the music from this video and placed it over Sanders’ entrance,” Gill said.

Johnson notes that the doctored clip may having been the work of anti-Sanders trolls. THAT, as it turns out, will be the real story.

NOTE: Man, I fucking hate getting taken by this shit. Whenever there’s a seemingly unbelievable story, the first thing I do is check that major trusted outlets (i.e. Billboard and Politico) have vetted the information. ARGH.