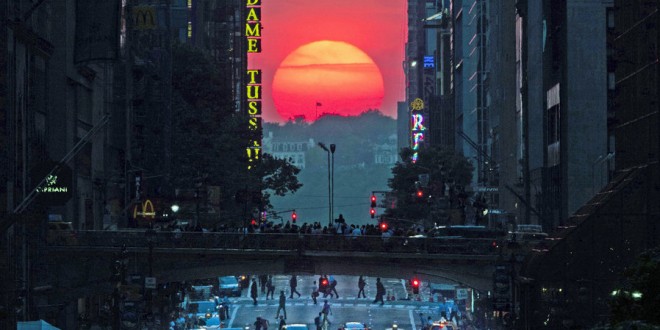 This Weekend: Manhattanhenge Returns To Gotham

The term was coined by astronomer Neil deGrasse Tyson. Via CNN:

Get your cameras and phones ready! The most picturesque sunset is coming to New York City this weekend. Two times a year, people in Manhattan gather in several spots to get a perfect shot of the sun aligning with the city’s carefully laid out streets. The phenomenon known as “Manhattanhenge” is spectacular to watch and it’s happening this Memorial Day.

During the event, the sun lines up perfectly with the borough’s street grid. As it sets, every street that runs east to west will be illuminated in a warm glow as the sunlight kisses the island. The two-day event starts at 8:12 p.m. ET on Sunday and Monday. An encore event will take place July 11 and 12.