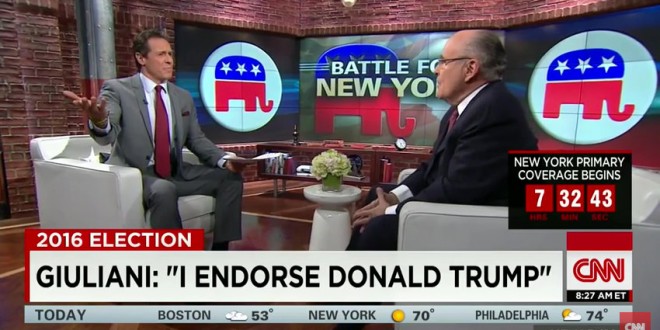 Rudy Giuliani said he thinks Trump can get to the required 1,237 delegates needed to secure the nomination on the first ballot. If the billionaire doesn’t get there but is close, the Republican National Committee should change the rules to give it to him, Giuliani said Tuesday.

“If he is within 20 or 30 within the nomination, they have to give it to him,” the former New York City mayor and Trump supporter told CNN’s “New Day.”

“That’s not the rule,” CNN host Chris Cuomo responded. “I know, but they change other rules, so why not change that rule?” Giuliani asked. ”Just because it is a rule, doesn’t mean it’s fair.”

Giuliani, who has said he will vote for Trump in Tuesday’s primary, said his support could be characterized as an endorsement, though he maintained that he was in no way involved with the campaign.

Previous Trump Prepares To Sue Over Delegates
Next Pat Boone: Those Satan Worshipers At Saturday Night Live Will Face Consequences For Defaming God